Another Kaka and Tradies 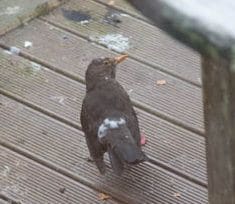 On our last post we had a sick Kaka, which sadly DoC were forced to put down. Just two days after that we found we had another. This one injured with a damaged leg. Not sure exactly what the problem is, but the leg seems quite displaced at the body, and the bird is completely unable to use it in any way. I did mention this to DoC, but they seemed somewhat disinterested … we can’t save every bird.

So we now have another feather child. It’s very shy, and initially would depart as soon as we appeared on our front deck, even with food. But it did know we put food out and has gradually become slightly more tolerant of us. Iris feeds it apple pieces , dried cat food and of course a weak sugar/water solution.

Flying is no problem but of course walking is almost impossible. It manages a sort of “dot & carry” using its beak and the good leg. Normally Kaka at rest will stand on both legs and appear almost asleep. “Hoppy” will settle down on the top of our bird house, and allow the damaged leg to hang free through the large gap in the top. We’ve also seen it settled down on it’s good side on the deck table.

Generally Kaka are quite tolerant of other Kaka around our feeding table, but “Hoppy” has become very defensive, and drive the others off. Whick makes us think this has become it’s primary (only??) food source. Funny enough it doesn’t seem to mind the blackbirds snaffling the cat food and the apple skins. ….. Kaka just won’t eat the fruit skins and balanced on one leg carefully hold the apple slice in the other claw while they eat the flesh. Hoppy of course can’t do this and leaves the fruit on the table and eats that way. 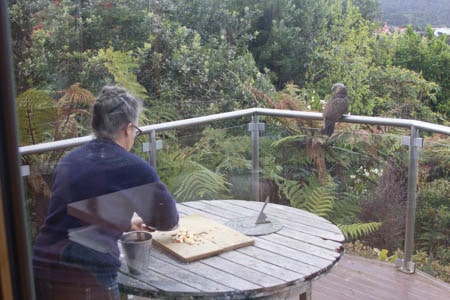 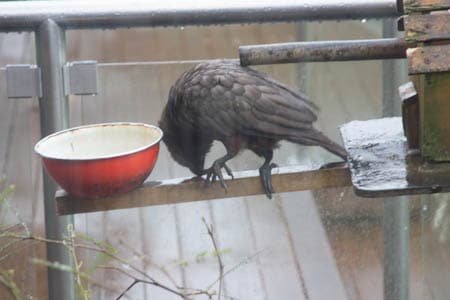 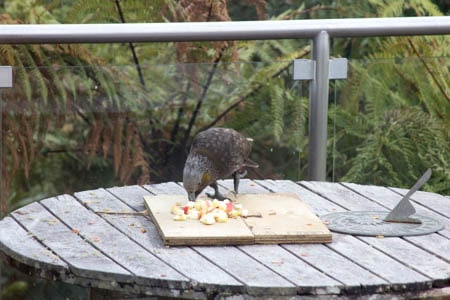 Feeding is difficult, as he can’t use one claw to hold his food while balancing on the other 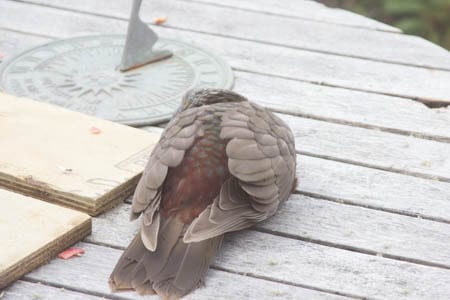 Asleep or at least resting. Again a response to having only one leg 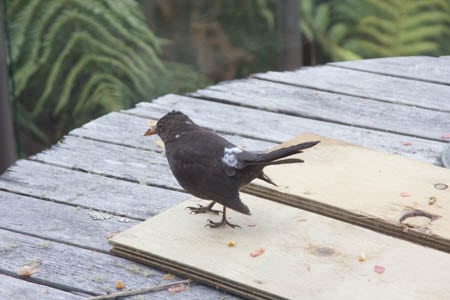 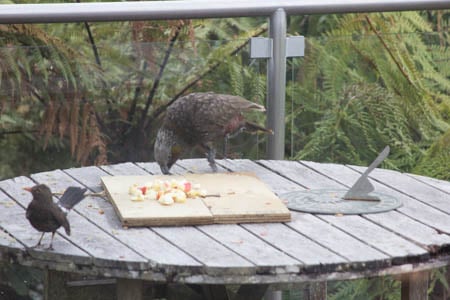 Last year we lost an old friend found dead in the vegie garden. Spotty (or Mr Spot) was our resident male blackbird   He was quite astonishing and we think he actually had a couple of “wives” and Iris is convinced he worked himself to death. Not sure how long he lived but at least 5 years. The name spotty came from a white spot on his back. I thought initially it was a dead feather, but he retained it over the years through moults, so I guess genetic.

And he’s left us a couple of daughters. Both have the distinctive white patches, but in this case on the rump, rather than higher on the back. They seem to have set up territories one at the front, and the other at the rear of Sails Ashore Lodge

The Year of the Tradies

Every year is different, and this has been no exception. We’ll remember it as the year of the Tradies. All part of the joy of house ownership I suppose. It started with needing our kitchen re-wallpapered. Neither of us felt competent and we decided to bring someone across. So we had Martyn from Phoenix  Services here for 3 days. Not a large amount to do, but very fiddly and now looks great. Same paper as before

Our central heating system had been getting a bit cranky, and not heating the guests dining room. We discovered we had to replace all the piping as apparently a faulty batch was bought into the country 15/16 years ago when it was first done. Looking at our hot water cylinder we realised it was 20 years old, and probably at the stage where it might let go. It lives in a cupboard in our kitchen, with the boiler directly below it. Not an easy place to service either unit, and my ability to get into tight spaces has diminished significantly over the past few years. So bullet biting time. We now have a nice new boiler room at our back entrance … thank you Hamilton Builders … and Colin and Royce from Fauls will be here tomorrow to shift the boiler out from down below, and reinstall it. Oh and just to add the (we hope) final bit. I’ve had to replace 3 mixer taps at Sails Ashore and rebuild 2 at Kowhai Lane. Wedging myself into tiny cupboard spaces under sinks is NOT my favorite occupation. 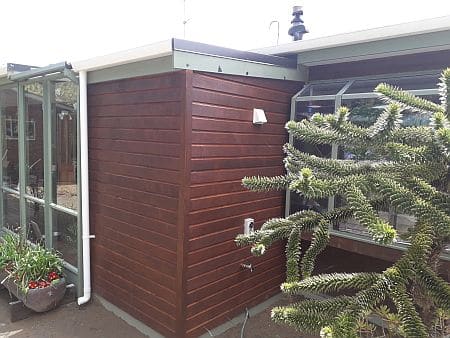