A couple of days ago I remarked to a neighbor across the fence that when this lock down finally ends New Zealand will be DYI’d to within an inch of it’s life. I was busy with hedge trimmer and power saw trimming up our shrubbery, he had a digger and was demolishing a shed, and all around I could hear lawn mowers and saws.

Iris has “winterised” the veggie garden and is busy catching up on the weeding. 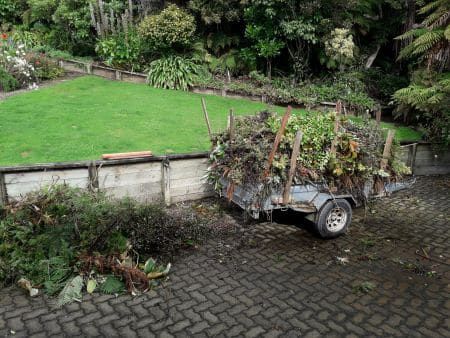 The last of 4 trailer loads of cuttings etc 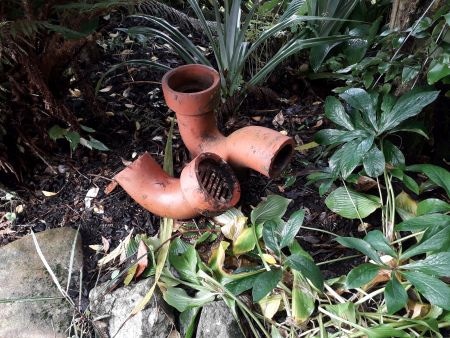 Old Waste Water Pipes about to have a change of use

When we dug out for the foundations for our new Boiler Room we discovered that there had been a toilet there as we found the old pottery soil pipes. The evil eye blinked, or at least Iris’ did and they now are about to find new lives as garden planters. We already have an under road culvert pipe buried vertically and a shrub planted in it, so thought these would work in a similar role.

Hot Water Cylinder as a Planter

When we built the new boiler room we decided the old hot water cylinder was probably getting near the end of its life … it was installed 20 years ago … so Iris decided that, like it’s predecessor it would look good as a planter. We had given all the old copper pipe to the young apprentice … he was due to get married, and the scrap copper would be a few more $$ for him. And he cut the cylinder down for Iris. 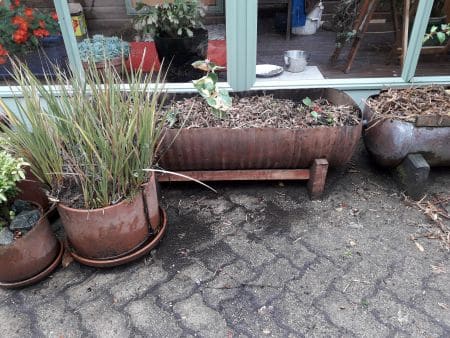 We’ve probably a dozen big rhubarb plants, and have it as one of the guests breakfast “fruits”. Very popular it is as well, especially with our Brit guests.

I’d discovered a recipe for Rhubarb Relish in Digby Laws ” A Pickle & Chutney Cookbook” ISBN 0 340 40115X   (my bible) . Did only a small boiling just to try it. Really good, so tomorrow I’ll get some more crushed ginger and brown sugar and do several kg. Iris has been quietly cooking and freezing rhubarb for the winter, and it seems a shame to let the surplus go to waste, so we’ll be well rhubarbed up.

Combine all ingredients in a large saucepan. Bring to the boil and cook slowly and uncovered for about 20/30 minutes (i cooked for over 60 minutes) until almost jam consistancy. Pour into hot steralised jars and seal. (I found the mixture too runny, so removed a couple of cups of the fluid, cooled it, and mixed in a couple of dessert spoons of cornflour, mixed well and gently combined with the still boiling mixture)

Just some of our relish and chutney store. Courgette Relish top shelf, Beetroot relish bottom left, and Rhubarb bottom left.
We don’t waste jars and the “Pic’s” Peanut butter jar is a leftover from Kowhai Lane. I don’t eat peanut butter, but Iris gets if for our guests. Pic Picot used to host a web site we listed with back when we were chartering. He now makes peanut butter, so we like to support him