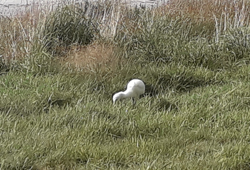 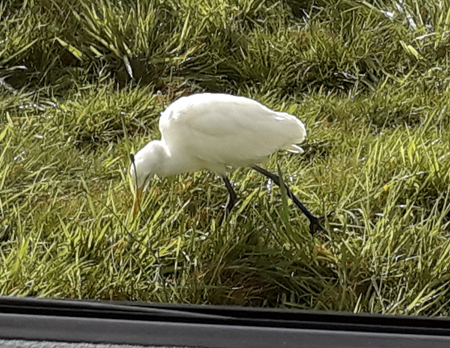 An early winter visitor are the Cattle Egrets. Normally arriving mid May I was surprised to find this one on the road at Horseshoe Bay.  It was foraging alongside the road, and was quite unconcerned by our van pulling up along side.

In the past we’ve had as many as 20 here, though the last couple of years rather fewer. Not sure about last year as we were in lock down, and so I wasn’t out and about as much as normal, and didn’t see any.

They always look more than a little miserable with their usually hunched posture. Maybe they are, coming as they do from Australia to our  winter.

Many years a go a Fisheries Observer on a Russian fish boat down at the Auckland Islands found one on deck … presumably blown well off course, and happy to find somewhere to land. The observer caught the bird, and as they were returning to Bluff brought it up. It was immediately impounded by MAF (Min of Ag & Fisheries) and subsequently destroyed. The explanation … illegal importation of foreign bird species…. a big No No!!

As we pointed out to MAF, they had a big project ahead of them, as around 800 descend on Southland each winter … all from Aus …. not to mention some 6 million Mutton Birds who swan off around the Pacific each winter and spring, Cuckoos who come down each year from the western Pacific, Godwits and however many other migratory species.