God must have made the Chathams last. He had a wheelbarrow full of everything left over, and used them up here.

quote from an Island farmer

Walking down to breakfast

Our Lady of the Antipodes Church

Hakepa from above Glory Cove

Finished for the day, bring the boat out of the water

The Chatham Islands had been on our bucket list for several years. We’d planned on going a couple of years ago, but life got in the way. So this year we finally made it.

It was all a bit frenetic, as we had builders turn up to reclad and double glaze Kowhai Lane Lodge, and we were worried that they might still be here when we were booked to go. But they flew through the work, and finished a week before the “OFF”. And as a bonus I had completed all of the new painting… had you asked me 6 months ago whether I would ever consider painting a 5 bedroom two story house I would have fallen about laughing.

But the down side was we were so busy that doing some background reading just fell by the wayside. And we both recommend that anyone planning a holiday there (or anywhere ???) do at least a little background research.

We both absolutely loved our time there. The scenery was spectacularly different, our accommodation faultless, and everyone we met  could not have been more helpful and welcoming.

As flights from Christchurch are on a Tuesday. The plan was to have a week away, The first 3 nights on Pitt Island, and the last 4 on Chatham Island. The weather decided otherwise, so we had 3 days on Chatham, followed by 2 on Pitt and a final 2 nights on Chatham.

Iris & I loved the Chathams. We will be going back. 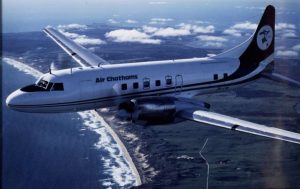 We flew from Christchurch with Air Chathams
We had initially planned to go directly to Pitt Island as soon as we landed, the weather decided otherwise. But we found that our Pitt Island Hosts had re-jigged our bookings with the Hotel Chatham, who met us when we landed and had us booked into their Travellers Rest” 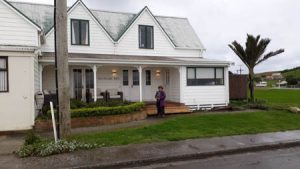 Travellers Rest
The Travellers Rest was delightful. Our room looked out over the Harbour, and was maybe 2 minutes stroll down to the main Hotel for meals. Which were excellent. We hired a vehicle from the hotel when we needed one, which was virtually anytime we left the immediate village. The Chathams are almost half the land area of Stewart Island, and most destinations are way beyond any day walk. We hired a guide from the Hotel one day, and Paige was perfect. She has a great combination of knowledge of history, the environment, local “colour” and a great sense of humour. Some destinations are with a guide only !! Lunch was provided. When we handed our vehicle back they asked us where we had been, and a small charge was added. This went to the property concerned… a great idea. 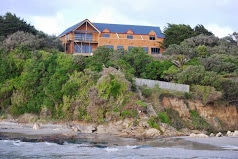 We were initially to fly to Pitt Island for 3 nights, but weather decided otherwise. We were delayed a couple of days, and actually went down by Fishing Boat from Owenga. Pitt Island Lodge was fabulous, and Bernie and Brent everything hosts should be. Our room overlooked Flower Pot Bay. The meals were fabulous, blue cod the first night, Pitt island mutton the second. Pitt Island mutton is to die for, and if we had a couple of acres on Stewart Island I would be importing a small flock. Brent was our guide while there, which was all part if the package … transport to and from the Chatham Island, Dinner Bed & Breakfast, and two days of tours. On Pitt you really have to have a guide. Even on a day trip, whether  arriving by plane or boat you just would not see anything. And Brent has access to what seems like everywhere .. most of the Island is private farmland. His knowledge is overwhelming, Bernie’s family were the first Europeans to settle Pitt, and her stories were fascinating, and Brent expands on this with the history, management and natural history stories that made Pitt Island come alive for us.