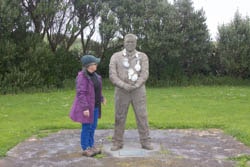 So this is the 3rd day of our visit 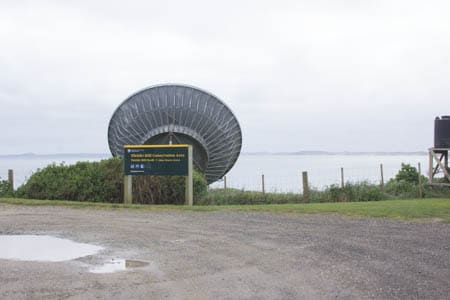 Telephone and Internet connections to New Zealand are by way of satellite. No idea how many channels there are, but I did once have a call delayed because of overloading 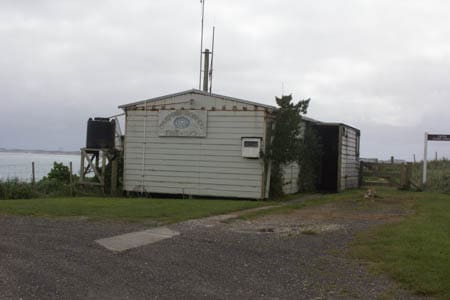 Before satellite sourced TV was available the Chathams had their own station. The building looks abandoned now, and there wasn’t any sign of it being available on our rooms TV

The wharf is quite new, and apparent cost in the order of $27 million. We never went down onto it, but it does look an impressive construction.
Not visible in this picture is a large breakwater which extends out to  give some protection to the berth. Fortunately for the construction the Chatham Islands are blessed with excellent rock for concrete aggregate
On our last day the freight ship arrived and was unloaded. 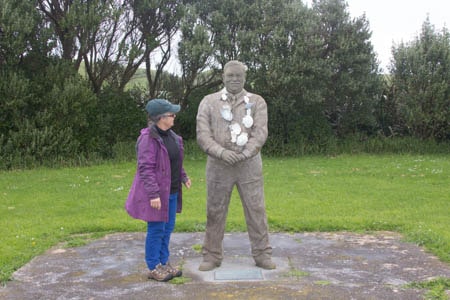 We drove down to Owenga for our trip  to Pitt Island, and arrived with quite a bit of time to spare, so went and visited the memorial to Tommy Soloman.
Tommy Soloman (Tame Horomona Rehe) was the last full blooded Moriori, and died in 1933. This life sized statue is on a small simple plot of land just beyond Owenga Village 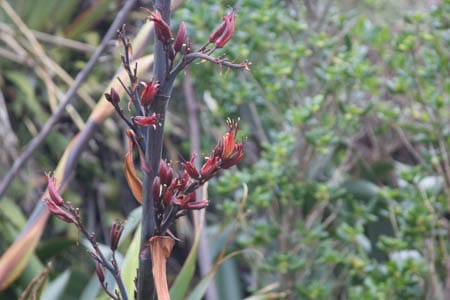 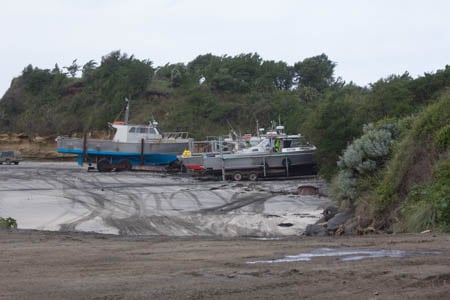 Fish Boats up on their trailers

Owenga is entirely open to the east, and gets minimal shelter from any seas from the South and Southwest. There is apparently a line of reef just out from the wharf which breaks a bit of any sea, but it’s horribly exposed. Hence the trailers to get boats out of the water. There were a couple on moorings, bit I suspect that would be only if conditions were perfect. 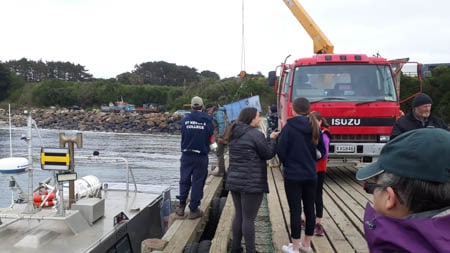 The wharf at Owenga is superb. Here  fish is being unloaded before we and several Pitt Island families and all their “mainland” purchases are loaded aboard for the  1 hour passage.
The Acheron is both a working fish boat and a fish and freight transporter to and from Pitt Island. 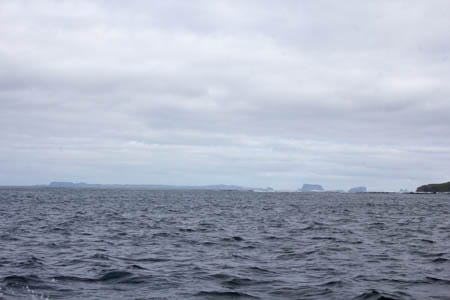 Our first view of Pitt Island

Point Fourier on the right. Pitt Island across the horizon, with the high blocks of Big and Little Mangere Island on the right horizon. 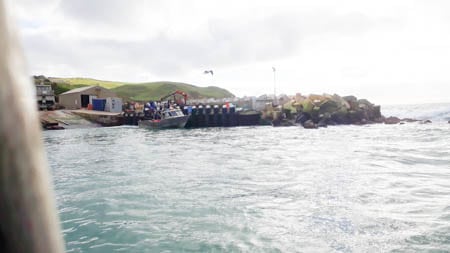 I wondered what the name meant, and our host showed us a picture of a very odd rock “Flower Pot” which sat on the shore of the bay many years ago.
Blasting reefs to clear access to the beach caused it to collapse 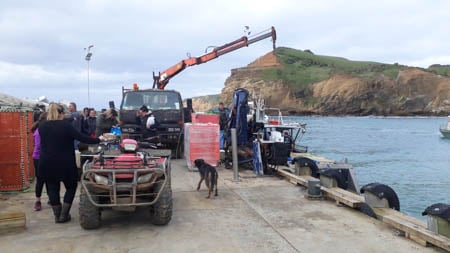 Once we and all the home comming Islanders and their gear was unloaded the days catch for the local Pitt Island boats was loaded aboard to be transported back to the Owenga Fish Factory.
The wharf reminded me of Halfmoon Bay back in “Wairua Days”  Semi organsed chaos, with gear being unloaded, families and friends being greeted, Cray Pots stcked up, our host rounding us up, and us trying to keep out of the way.
And of course a couple of obligatory dogs. 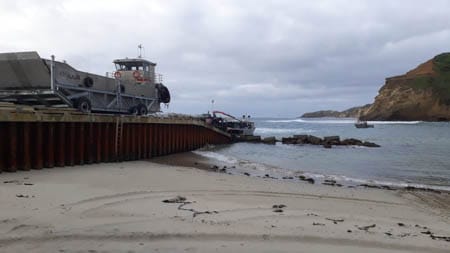 The big alloy vessel on the wheeled cradle is the Pitt Island Barge, or rather landing craft. It has two 350 hp jet units, and is used for heavy freight and stock to and from Pitt Island 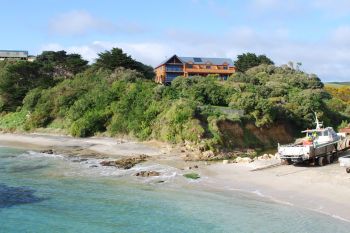 Our home for the next two nights. Flower Pot Bay Lodge is just above the wharf

Flower Pot Bay from our room 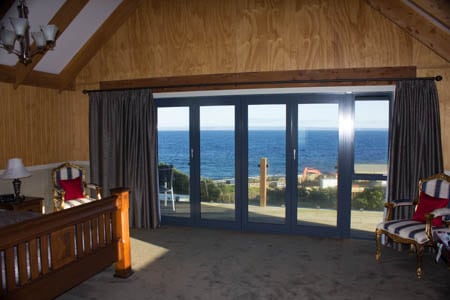 Flower Pot Bay from our room 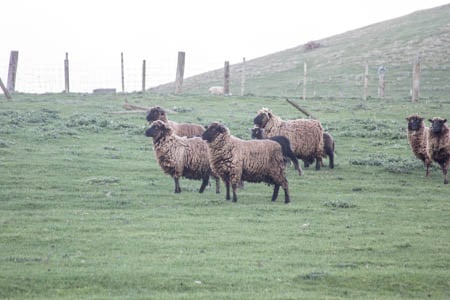 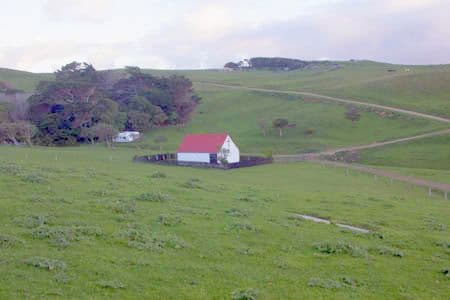 Church of Our Lady of the Antipodes
Just up above Flower Pot Bay Lodge is this delightful little church.
There is a story that a priest visiting the Island some many years ago  failed to turn up when travelling on a motor bike between farms.
The radio operator contacted the various families at “Sked” time  time (before telephones), and said the Priest was “Lost on the way to Glory”
(Glory is the bay at the south east corner of Pitt Island) 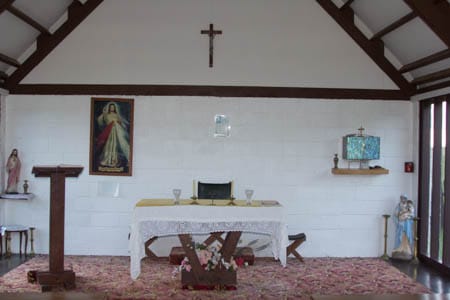 We woke to very little wind, and much more sun.  And we had the word that we would be off to Flower Pot  Bay Lodge on Pitt Island that afternoon, by fishing boat from Owenga. Pam and Andrew were going across as well. Like us they had a week on the Chathams, but as they had come from Wellington they arrived a day before us, and were due to depart a day earlier … the flights are on a 7 day cycle. They decided to hire a vehicle and explore to the south, and also up to Waitangi West. Iris and I visited the museum, which was fascinating, and then went for a walk up onto the lookout on Tikitiki Hill. We all met up mid afternoon, and drove down to Owenga where we and several Pitt Island secondary school age children and families would be on the boat with us. Like us they had been storm bound on Chatham Island. A fact of life …. waiting for the weather. The trip across took around an hour and there was a fair crowd on the wharf to greet the returning children home from boarding school on the mainland. Brent our host was there to meet us and he took our bags up to the lodge, while we walked up off the beach and through the lodge garden, met Bernie and got settled in. We had a hour or more before dinner. Iris wanted to sit for a while ….. boat trip and I went for a walk. Brent & Bernie have a flock of Pitt Island Sheep, or rather “Saxony Merinos” which the breed originally was. They were expecting some sheep nuts from me, which I hadn’t found, and so spent the time I was with them glaring at me. In a corner of the same field was the Pitt Island Church. A tiny simple building in a delightful setting