Walking around Ulva Island with our guests at this time of year we are continually reminded that spring is traditionally when the next cycle of life gets underway.

And on Boulder Beach yesterday we came across a very pregnant Hookers Sealion taking her ease up out of the water. If true to form she should give birth sometime in mid December.  The sequence is quite interesting, as Hookers females are generally mated within a few days of giving birth, again generally around mid to late December. I understand the fertilised egg develops to  128 cells and then stops developing for three months, at which stage the fetus starts developing normally. So to effectively the females can be perpetually pregnant. If this one gives birth here, there is a possibility she will not find a mate … and so next summer will be barren. This occurred many years ago when “Samantha” gave birth in Halfmoon Bay. She lost that pup, and presumably was not mated, as there were no reports of an attendant male. She reappeared two years and again presented the village with a pup and the pair became quite a feature around Mill Stream and several gardens she took a fancy to as nursery areas . 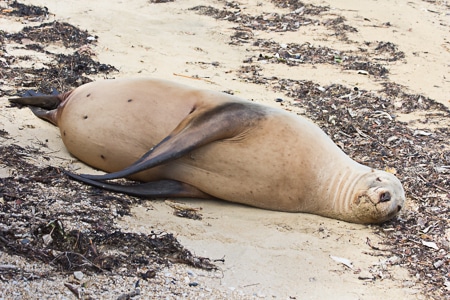 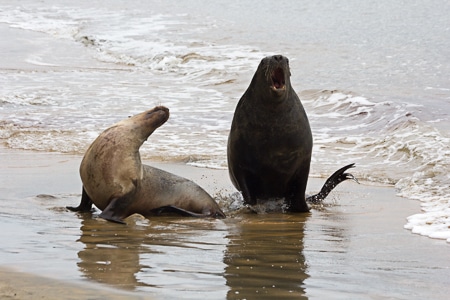 This female is quite noticeably smaller, and much more svelt

My post of “Big & Little” a couple of days ago mentioned a pair of amorous Sealions on Sydney Cove. The female there is quite noticeably smaller and as I noted most probably a virgin bride. 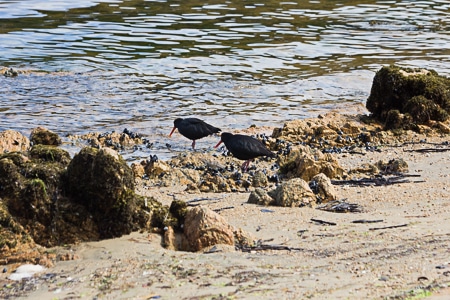 Just a few metres along from the expectant mum, a pair of Black Oystercatchers mated while we watched. They usually start nesting in the next couple of weeks, and as we are due a spring tide in 5 days she may well lay a couple of days after that. Oystercatchers generally nest a metre or so beyond the spring tide limit, and with incubation around 24 days with luck, and no big storms the eggs should hatch before the nest is threatened by the next big springs.

And this pair immediately post mating set about a couple of wekas fossicking for food on the sand.

Wekas are the big issue for Oystercatchers, as the nest is generally right out in the open, and wekas are inveterate egg thieves. But oystercatcher aggression is quite impressive, and they will see any intruder off. Outside of nesting time for oystercatchers they and weka seem to generally ignore each other, but that changes in a big way from a few weeks before

And in spring we see the new growth on our spectacular tree ferns. The symbolic “Koru” (Trans Maori “Loop”)   is symbolic of strength and new life, and is a central part of Maori art 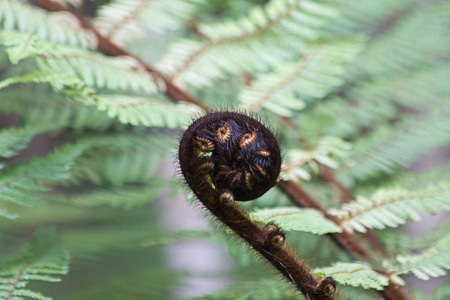