Sails Ashore is pretty high up on the hill under Observation Rock, looking out over Halfmoon Bay. And so don’t get as many frosts as down lower in the village. In fact we generally seem to average maybe 4 mornings a year when I can walk outside, and say, Yes, we’ve had a frost

But this morning we had one.  Iris looked out and remarked our front lawn was white. Now a white lawn does not mean we break out the ice skates, as with a reasonably high level of humidity it doesn’t take much to show.  But a frost it was. 0.9 Deg C on our back lawn. Air temp on our weather station which is around 10 metres above ground level was 5 deg C. 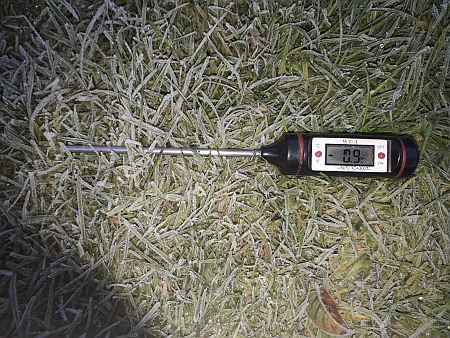 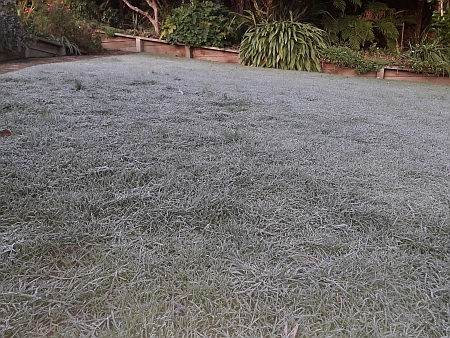 Today I hooked up our electric domestic water override.

In the past we’ve relied on a diesel furnace for our domestic hot water and our central heating. And anyone who has fueled up a vehicle recently will know the pain involved for the hip pocket. I had always intended to utilise excess electricity production from our solar system to heat our water, thus saving on diesel. (Our  cylinder has a 3 kw element)

We discussed this with Tansleys before we installed the system.  They thought a function in the inverter could be used to switch the hot water element on when the battery reached 98 % full. and switch off again when it dropped below 95%. (this “gap” is called hysterisis )  . ……Something else I’ve learned since we started this project……. We found it did not work, something that surprised even the Geeks at the help desk .

The software that runs the inverters does know the state of charge of the batteries at all times (SoC), and I understand uses a complex algorithm to work this out. It apparently looks at several factors which includes the actual battery voltage and rate of charge (or discharge) at the same time, and it also has a totaliser function which “counts” power flow in, and out of the battery.  All far too complicated for me, and no way to extract the information in a usable form.   But, I found a clever little piece of kit which does monitor the voltage. Not as precise at determining the SoC as the inverter does but close enough. So when the battery voltage hits 54.5V it closes a relay, turning on the electric cylinder element, and off again when the voltage drops below 53.9.

So now its fully automatic, rather than us having to continually monitor the voltage and switch it on and off manually … I forgot to switch off one afternoon, and flattened the batteries at around 0200. A steep learning curve.

We won’t get much benefit during the winter except on really fine days, when we can reach full battery as early as 1130. But even so, and doing it by hand up until now has given us significant savings. Since we commissioned the plant in December we have cut our diesel usage to around 50% of what we would have done.