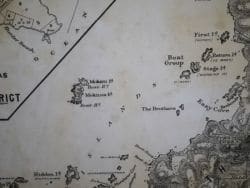 As well as being our accommodation and tours business’s public face, our web site is also a place for us to indulge our interest in our Island home. The obvious sections on birds, orchids and fungi and Ulva Island are easy to spot. Perhaps a little less obvious are the pages on Stewart Island History and specifically placenames.

I know from our page analytics that the place names pages get regular visits. Not huge numbers, but steady.

The Island starts to come alive when we look at the stories behind the names. But reading through the different pages it is readily apparent that many of the stories are thin, to say the least, and it would be great to know more about the people whose names or events are touched so briefly.

The following is a series of emails I recently fielded about one such person. 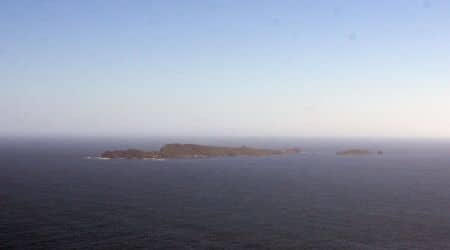 The Page in question is Big & Little Moggy

Hello Sails Ashore,
I live in Tasmania.
My research of place names in New Zealand uncovered “Small (Big) Moggy” and “Large Moggy Island” situated off the west coast of Stewart Island.
On your very interesting website it is noted that Large Moggy island is named after an Australian Aboriginal woman and child who were castaway on one of the islands.
I wonder if you would be so kind to tell me more about the naming of the islands or point me in the direction of a source that would have the information?

Thank you very much,

Thank you for your email as below. Firstly a minor correction. “Small Moggy” should be “Little Moggy”

My main source is “Rakiura” by Basil Howard ISBN 0 589 00901 X, page 52. And is an addendum. from the Voyage of the Snapper circa 1823 as recorded by de Blosseville, who was a midshipman aboard the Coquille and in the course of his time on the New Zealand coast interviewed many sealers and seamen.

It appears “Moggy” was a native of Van Dieman’s Land who together with her child landed here with a Scotsman (sealer)  He was captured by Maori, escaped and returned to protect the woman, who had by legend hidden in a cave. He failed to find her and then shipped on an American Sealer, returning 3 months later and found the woman who was by now venturing out of her hiding place.

Grady (Sealers & Whalers, ISBN 0-474-0050-8) puts a different date on this at 1823, and the child as a 2 year old and the pair as part of a sealing gang off the General Gates. For a variety of reasons this is almost certainly incorrect, as that gang was massacred in around 1807, with 5 or 6 men killed, and the only survivor being a 14 year old boy by the name of James Caddell.

Early Stewart Island had significant connections with Australia, both sealers and whalers.

I hope that this is of help.

Thank you so much for your prompt reply containing very helpful and important information.
Here is the reason for my interest in Moggy Island.
A black woman described as a well known native by the name of Black Mogg drowned in a boating accident in North West Tasmania in August 1851.
The Anglican Minister who completed details of her burial named her Moggy!
By a process of elimination it is clear that this woman was also “in service” to a family living on the Tamar River in Northern Tasmania in c1830.
This family had lived in NSW and their family historian described the incident from which the woman survived on the South Coast of New Zealand in 1822 or 1823.
Up until now I thought the woman was named Moggy after the island.
But now, with your information it would be appear to be the other way around.
At this stage I am prompted to ask how, when and by whom was the island named in her honour?
The woman’s body was buried in an unmarked location in Stanley, Tasmania, and if the place can be located and verified it would seem to me to be appropriate to identify it with accurate details.

I look forward to familiarising myself with your references.

Thank you once again, this is a very interesting story.

The Island was probably initially “Moggy’s Island” or the place where Moggy hid, or something along those lines.  Lots of places named that way, as often there was a story involved, and stories tend to cement a name in peoples memory.

The suggestion that she was part of the Murderers Cove gang, caught and killed in the early 1800s is quite patently incorrect. And that happened either at Murderers Cove on Big South Cape Island or possibly at Nicholsons Harbour on Stewart Island, just to the east.  If at Murderers Cove that would indicate the event happened between April and June, as the Birding Islands were Tapu and Maori would not have been there for the rest of the year on pain of death.

I wish old Harrold Ashwell was still alive, as filling in the details of those early names really fleshes out the story. So many names appear, often out of nowhere, and then vanish again.

I have a copy of an old map of Stewart Island, which I will digitise and add to the relevant place names pages. Sadly many of the names I’ve found nowhere else. But the story you have give me below will with your permission, go into the page on Big Moggy and again with your permission I would like to do a Blog Post, with , again your permission, your email address.

I have a 4th edition copy of an old NZ Govt map of Stewart Island (pub 1955) and there Big and Little Moggy are recorded as Mokinui and Mokiiti respectively. As I understand it the suffixes “-nui” and “-iti” mean big and little. So perhaps this was an attempt by the cartographer to “Maorify” the name “Moggy”

There is no indication as to when the 1st edition of this map was published. 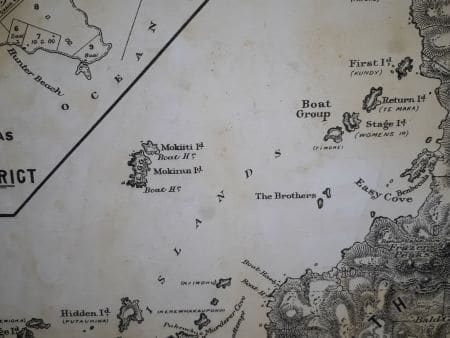