It’s Been A Busy Summer

12 months ago in the middle of lockdown our future was, to say the least, a bit uncertain. Who would have foreseen the busiest summer the Island has had, well at least in our  experience.

It’s Easter as I put this post together, and normally for us this signifies the end of the season. Not this year, and although the extreme rush we’ve had seems to be over there is still a steady number of bookings, but at a more manageable level.

Today we have no guests at Sails Ashore, and Kowhai Lane Guests are all doing their own thing. Yesterday I took our Kowhai Lane guests to Ulva, and then in the afternoon I took guests of Expedition Ship Strannick for an Ulva Tour as well.

To-day we have a day off.      and it’s blowing a full gale with rain just starting. A perfect time to get this blog posted.

Seems like only yesterday that we had the longest kiwi interaction I’ve had on Ulva. I managed to film only the 2nd sighting. The 1st was a female, and only in view for a moment or two, but any sighting is a good one. Imagine our surprise when just a few moments and maybe 20 paces further on we found a young male . The video is a composite of perhaps 5 minutes of viewing. After it finally moved out of view and a “wow !!, can you believe that” pause we moved on maybe another 20 paces and there was a couple viewing a third bird on the other side of the track. Just a brief glimpse. But 3 separate birds in virtually the same place and at the same time.

The rest of the tour seemed somehow a bit ho-hum.

Late last month walking along Sydney Cove on Ulva we came across an old anchor up at the high tide mark. It had apparently been hooked up on a Charter vessels anchor and they had dropped it up on the beach. This report in the Southland time speculates on the provenance . And mentioned three possibilities …… The brig Amherst, Whaler Pacific or brig Cosmopolite.

Amherst …was a brig of around 170 tonnes. She reported losing an anchor in a gale while at anchor in Paterson inlet on 2nd   September 1857, but recovering it on the 11th January  see Papers Past. So she can be ruled out

Pacific …was a full rigged whaler of 347 tonnes, and was wrecked on 1st Feb, 1864. Driven ashore on Pipi Rock in a “Perfect Hurricane” with both anchors ahead.. (NZ Shipwrecks account)  There is no mention of her losing an anchor, and in any case the anchor on Sydney Cove would be ridiculously small for a vessel of her size. So in my opinion she isn’t a candidate.

Cosmopolite … was a brig and was in company with Pacific when she was wrecked. . Updated 5th April. Brig Cosmopolite 183 Tonnes, registered to Ehrenfried , Hobart, lost 1866.. So at 183 Tonnes I would think this anchor and chain would be far to small for a vessel of that size and windage. For example, Talisker 36 tonnes, ketch rigged had a 50 kg pick anchor (similar to the anchor illustrated). and 13 mm chain.    Both Brigs were around 5 times Taliskers tonnage and would have had significantly more windage, At a guess that anchor would be around 120 kg and the chain maybe 14 mm. Ships in those days were, by todays standards significantly over anchored, as of course they lacked engines and so the anchor really had to be as close to drag proof as could be handled.

A few days ago it was lifted by helo further up onto the hard, as it was quite rapidly sinking into the sand, and of course, as a possibly historic artefact it’s future needed to be ascertained.

Yesterday my guests off Strannick and I had a look at it. Again it’s my opinion but I doubt that this anchor came of a vessel of much over 70 or 80 tonnes. The chain is quite light, and although we did nothing more then look (it is after all a possibly historic artefact, and therefor should be examined by appropriately competent people) the chain looked more like machine made, rather than hand made, as would have been the case for a mid 1800’s vessel. The shackle in the 2nd image was definitely machine made and I personally wouldn’t use it on anything larger than a fizz boat. But it could of course have been part of the salvage operation. 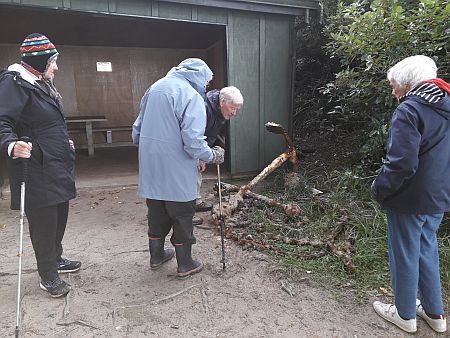 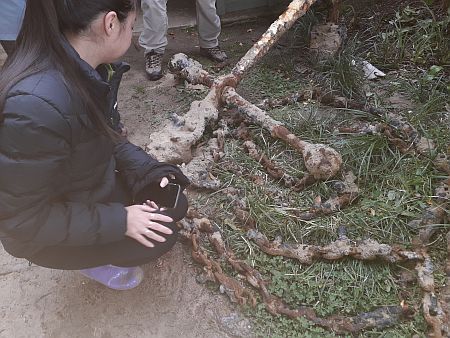 addendum  Posted 6th April.
I had a talk with the local freight ship owner, as they had had a barge anchored in the area back in ’02 when DoC were doing the Ulva tracks, as I’d wondered if it may have been from then.
He told me they had in fact snagged it while moving the barge, and had dropped it again. It had originally been dropped by an oyster boat.
So there it is………… much more prosaic
Subscribe