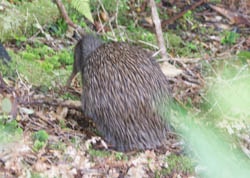 This year has been the best ever for our guests as far as Kiwi Sightings go. A new operator has started up and has been very successful. The “worst’ our guests have reported was 3 sightings, the best… 9 for the evening. And all home well before midnight.  Cost is around $85 pp, which includes transfers from the village.

And it’s been very good around the village as well. Before Christmas we were able to point about 80% of our guests in the right direction. Not so good since then as it’s impossible to keep that sort of thing a secret, and sadly some tourists really need a lesson in viewing behavior.

But a week or so ago a french guest had a kiwi come out of the forest towards him on a track within the village and spend almost a minute investigating his shoes and laces.  and this at 2030, over an hour before dark. … amazing.

The dry period we had before Christmas is just a memory, as the last month has seen quite patch weather. Some really nice days, but also a goodly helping of rain. So our garden is looking nice and green.

But looking back over the orchids season what has been noticeable has been both a poor flowering for most …. all ?? …. species, and also the flowing has been unusually short for them all. And a few days ago we found the first of the Autumn Orchids out just above Boulder Beach. Very early, as generally I wouldn’t expect to see them for another month or so. Easy to make predictions of “an Early Winter” but who knows. The way the seasons have changed in the last few years I would probably put money on another “winter we have when we’re not having a winter”. 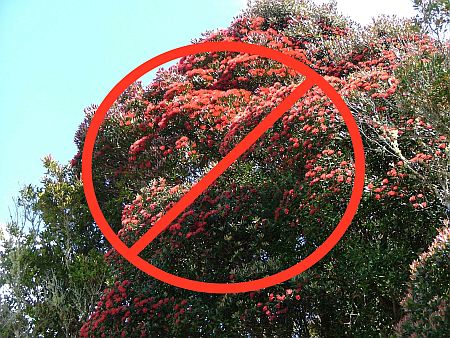 No Rata This Year

Rata “masts” only every several years, and last year we had a good one. With many trees being quite spectacular, although the season was quite spread out. Generally we would expect that the following year would be quite poor, although the very occasional tree might have a good display.  … There is always some one in every crowd who is late ….. And at the Ulva landing there is one tree which flowers very early, and every year, usually late October or early November. Never many blooms, but always noticeable. This year I can’t recall seeing a single bloom, anywhere. And in my last post in January I mentioned our Pohutukawa coming in bloom. I was a little previous, as only one of our several trees actually produced flowers, and it very few, rather than the glorious display we expect

I read in the paper a few weeks ago the DoC were expecting a good Rimu Mast this year.  This should do good things for the Kakapo population as they breed to take advantage of the high energy food Rimu seed provides.

The seeds are quite sweet, and being so tiny are a bit of a pain to pick up without lots of the forest floor litter as well. But they are worth trying. 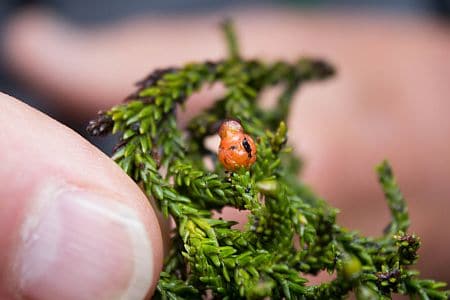 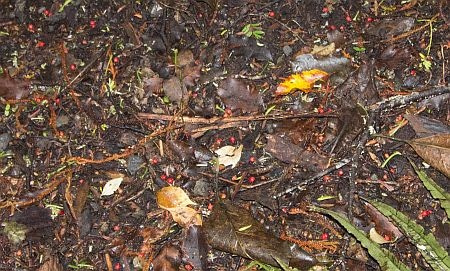