Rimu Timber and a Joinery Project 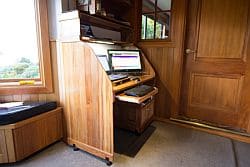 This post grew out of a recent project, and thinking back to timber cruising in my Forest Service career

When Maori first arrived in New Zealand however many centuries ago they found a land almost completely forest covered. And a “big player” in those forests was what they called Rimu and botanists Dacrydium cupressinum. Huge areas of that early forest fell victim to forest fires, both accidental and deliberate. And of course Maori utilised various timbers as did the later European settlers. The latter with huge enthusiasm as many of those native trees gave superb construction timber, and many were, as a bonus, extremely beautiful decorative timbers. Among those is Rimu, and it’s probably fair to say there is more native Rimu timber in old New Zealand homes than any other.

When I joined Forest Service in 1965 the country was still heavily harvesting our native forests. But certainly amongst my bosses was a realisation the time was fast approaching when all would be gone, and we really needed to call halt while we still had some forests left virgin. I spent several months of that first year as a very junior member ( Taggie) of a timber cruising gang. We measured native timber in the forest, to sell to the timber millers who would harvest it.  As a job I loved it, and I probably learnt some of the most important field skills in “reading” country and working safely there.

Offhand I can’t remember when government finally bowed to the increasing voices of Conservationists calling for a halt to all native timber milling. But it was probably around the late ’80’s. The law does allow for some sustainable yield harvesting, but I understand the volumes are low, and consequentially the value of the timber is very high.

About 30 years ago Iris & I started to look at renovating our 1947 built house. We both love timber, as it is timeless and just looks better with age. And we could still then purchase Rimu tongue and groove 9mm thick and 80mm wide as a decorative timber. So our kitchen and family area has a Rimu ceiling, half paneled walls and rimu doors and kitchen joinery. Three years later we did the same exercise in our bathroom and entrance way. We were told by the  timber merchant that if we had ideas for the future we had better buy now as they expected it to be very difficult to find, and thus prohibitively expensive. We had an idea that the next project would be to do up our 3 bedrooms, so we bought enough to do this. I varnished it both sides, and shrink wrapped it and put it into storage.

In 2004 we decided to rebuild part of our home as a Bed & Breakfast and that timber then found a home as the ceilings in our two guest rooms.  But we still had quite a bit left over, and by now it was seriously valuable. I understand that 9mm T&G is now worth around $40 a lineal metre IF you can actually get it. Incidentally the joinery in our guest rooms is Rimu which was salvaged from logs lost decades ago…. sunk in a Westland lake and being salvaged as high value decorative timber. That was one bill I didn’t look at … too scarey…. even back then.

I’ve been a bit unhappy with my computer workstation for some time…. a pretty basic particle board covered with a paper faux timber veneer. So I decided to build my own, using some of that left over rimu T&G. And amazingly Iris agreed … maybe thinking it a good way of keeping me entertained during lock down.  And now I have a brand new solid Rimu desk. I would have like to do the “roll top” thing but that would have been a step to far according to Iris, and I have to agree.  I now understand why furniture costs what it does. Quite apart from the raw materials the labour content was impressive. Mind you a lack of the necessary cramps for clamping the t&g when I was glueing it together meant I had to improvise using a compression wedge setup, and build cramps out of threaded steel rod and bolts. But we managed and the result looks quite at home in my work corner.

The old desk looked a bit like the wiring behind ENIAC as I have lots of bits, all of which seem to be important, and they all have wires. Our Island power supply is pretty good, but it does go down without warning. So I use a laptop and most of the peripheries I’ve set up to run of an auxiliary 12 volt power supply, again lots of wires. My new desk has a false back, and all the wiring is neatly hidden out of sight, but easy to get at. Very tidy.

I’m not giving up the day job for cabinet making. But It was fun. I had to invent ways of doing things, and in hind sight realised there were better ways if I ever did it again. But it works & looks MUCH better than the old one. 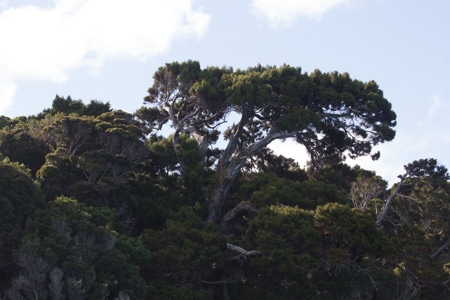 An elderly Rimu on Ulva Island. Rimu are normally the tallest tree in our forests,
head and shoulders above the canopy. These trees have throughout their lives been exposed to salt laden winds off Paterson Inlet
Rimu do NOT like salt water and the new growth will get burnt. Which explains these trees poor form. 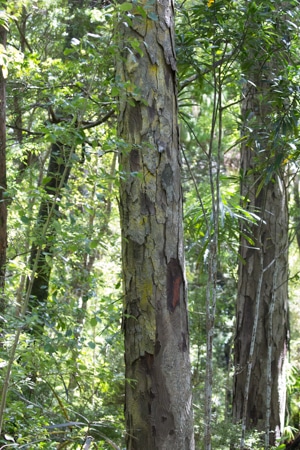 “
A middle aged Rimu. Although spectacular Stewart Island specimens are generally much inferior to those found further north.
The Island is really close to the southern limit of growth 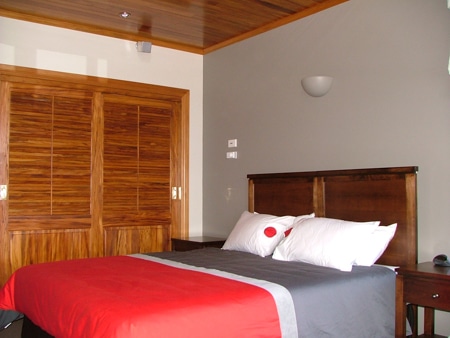 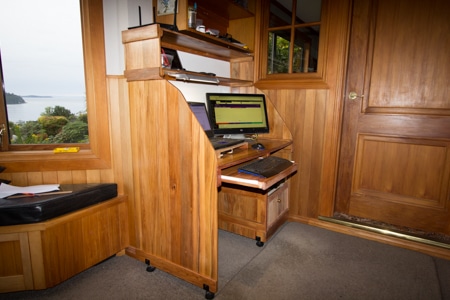 The not quite finished desk. I still have to fit the front to the printer drawer.
The wall paneling and door is a feature of Sails Ashore, and most rooms have it somewhere.
We like timber

No photos of construction.
Iris will tell you I’m more than a bit messy, at times it wasn’t a pretty sight