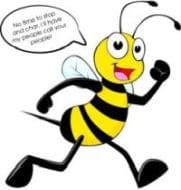 My apologies for my lack of posts this month. We have been very busy with guests and tours, and I’ve just not been able to find the time to post.

But finally today I can do a little catch up. It’s raining steadily, so I can’t mow our lawns… they really need it as well. We have no guests today, and Kowhai Lane Guests are all squared away and doing their own thing

The whole community breathed a  collect sigh of relief on the 2nd Feb, when our drought broke with a total of 32 mm in 24 hours. And since then we’ve had a couple of good showers, and several days of light rain. All of which have done great things for the soil water levels. But looking back it was certainly the longest and driest period I can remember in almost 50 years living here. I suspect we’ll see a lot of water tanks arriving as folks go into “we’d better be better prepared for next time” mode.

We still have a total fire ban in place, which seems really strange, considering the amount of rain we’ve had, and how wet the forest is.  Maybe whoever is in charge is on holiday !! 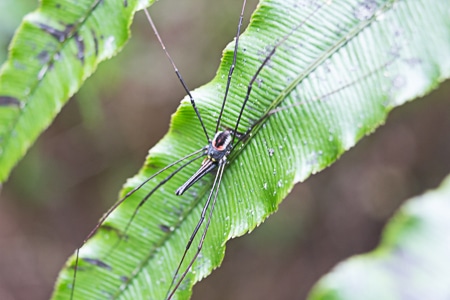 Found on a Hounds Tooth fern frond, and no clues as to what it is.
I’ll have to by some better reference books

I spent a lot of my time as the Islands Forest Ranger field managing research expeditions, and have hosted many similar since then. The scientists on these expeditions were very patient with me, as I was always interested in what they were doing

But one discipline I never saw were entomologists, and so what I know about our Island insect life could be written on the back of a small envelope using a very broad pen.

There is a small colony on Little Solander Island 90 odd miles to to the west, in the western approaches to Foveaux Straits. We used to see these elegant diving birds quite regularly when we were chartering in Fiordland, but a lot less often here.

So you can imagine my surprise when we found one in the forest at the back of the Ulva Island cottages a couple of mornings ago. It had been a fresh breeze of South Easterly overnight, and I can only asume he come down in the small clearing and of course was then unable to take off.

I had a look at its beak, and decided that discretion was the better part of valour, and that DoC staff were better paid than I was, so phoned them. As it happens they had a gang landed just 15 or so minutes previous, and a couple of them turned up to deal with the bird.

Later that afternoon we saw it soaring off Sydney Cove, so all was well. 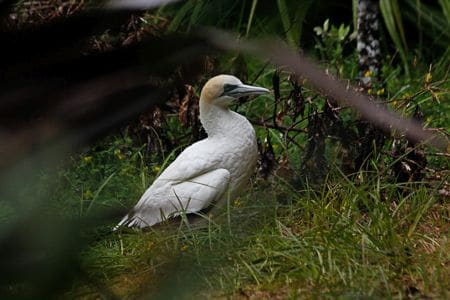 Grounded Gannet. That beak is scary. 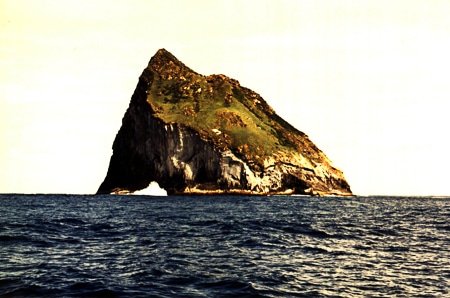 Little Solander
The Gannet Colony is on the right hand slope, about midway up and is
apparently the worlds most southerly 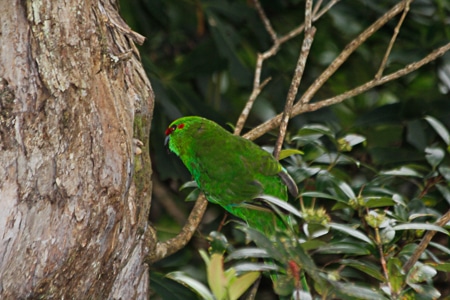 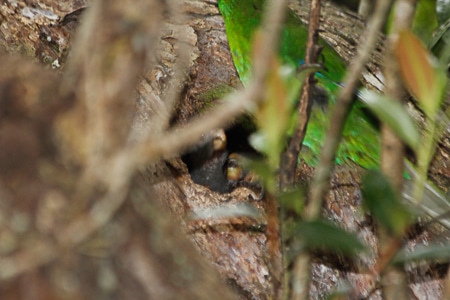 Three nestling can just be seen

This year has been quite a disaster in some ways. It’s been the worst Orchid season I can remember, with all species well down on flowering, and some I’ve seen only a couple of blooms, where normally I would expect dozens

And the coprosma fruiting is very ordinary as well. Where we would expect bushes laden with berries, most stalks have at most 4 or 5 fruit.

Coprosma fruit at this time of year, and are an important food source for several of our bird species, and especially parakeets. I’ve seen a few pairs looking as if they would nest, but have seen just a single nest. So am wondering if the lack of food has discouraged some birds from nesting