Technically Ulva Island is temperate Rain Forest. ………….We don’t have a high rainfall, around 1600 mm p.a, but we do have a lot of Rain Days. Perhaps as high as 3 days out of every 5 days with some rain. With the recent dramatic changes in our climate this ratio is probably getting lower. But it still means we have an amazing forest, one which reflects New Zealand as the home of the worlds ferns. They range from magnifying glass size to some which approach 15 metres in height .

Our Forest is a rata, kamahi, podocarp association… ……….. Stewart Island has no naturally occurring beech (Nothofagus spc), and in comparison to the rest of New Zealand tree form is somewhat lower. But it is a magnificent forest non the less, and as is now free of introduced mammals is as close to pristine as any place in New Zealand that we can visit.

Native Birds are everywhere and populations are healthy, thanks to the removal of rats. We don’t have a huge variety…. only around 18 land species… but they get really up close and personal… and some of my guests who come equipped with super long lens get quite frustrated at times. And as our native birds show little fear of people so birding on Ulva is a quite special treat.
Ulva Island Forest 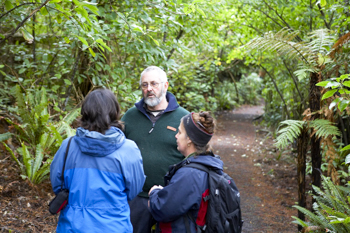 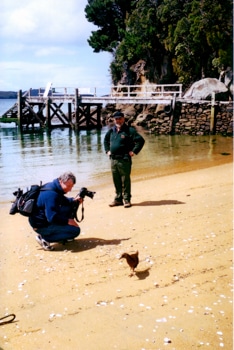 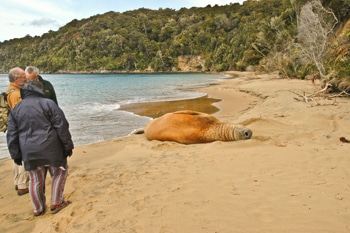 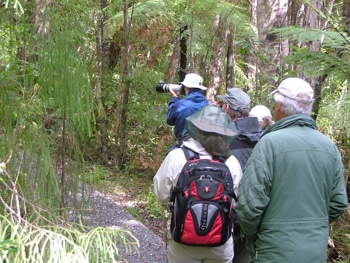 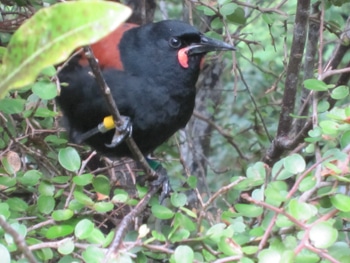 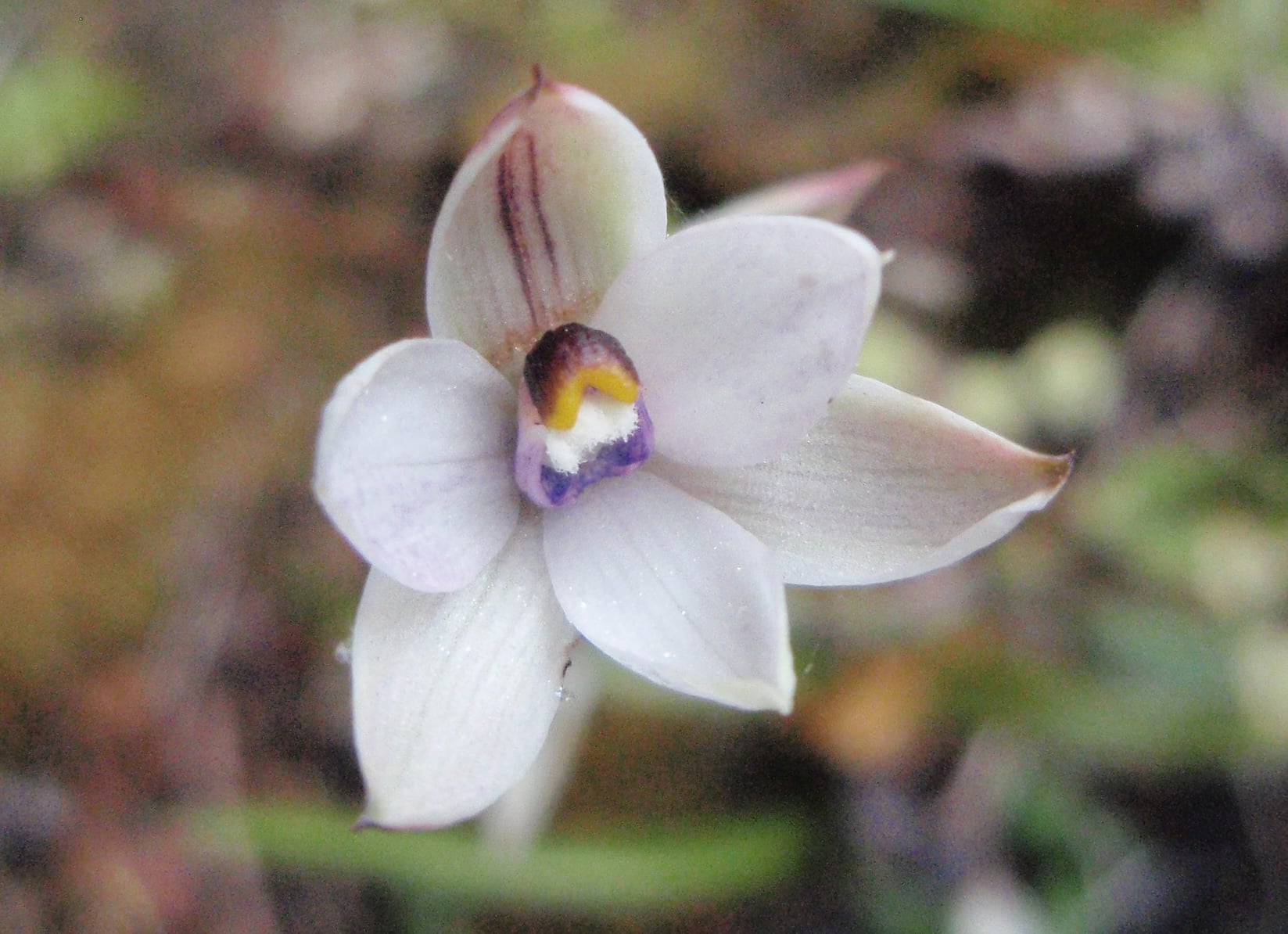 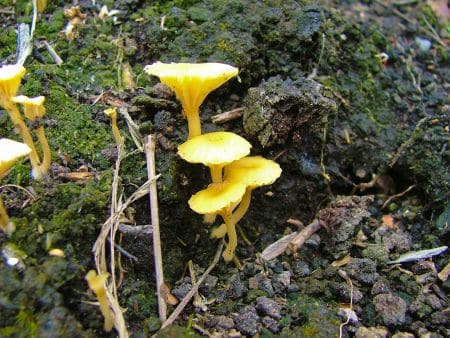 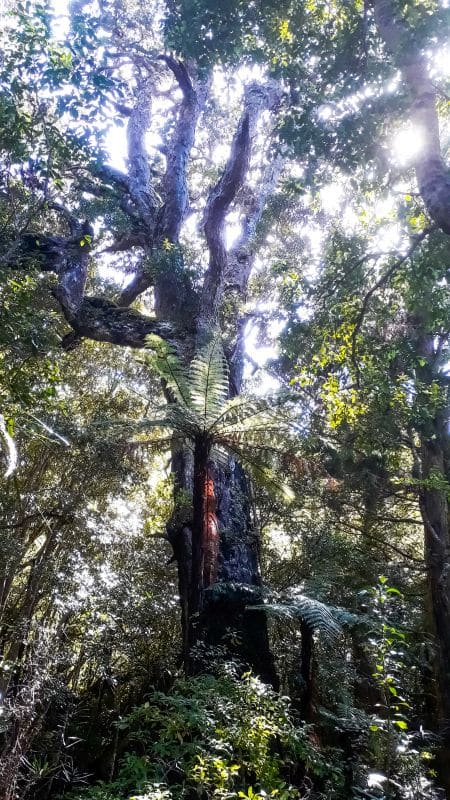 A Tree in a Forest, A Forest in a Tree

A sapling when Maori arrive in this country 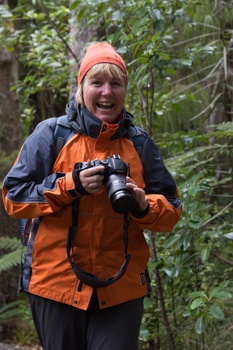 Happiness is a Photographer on Ulva Island

Where The Ulva Island Story Starts.

The story of the Ulva Island Open Sanctuary probably starts with the efforts of Charles Traill, the first Postmaster, who persuaded the Government of the day to have the Island declared a reserve over 100 years ago. Ulva became a “destination” for early tourists, partly because of its Island situation and virgin forest and partly because of it’s “Southern-most Post Office” status.

Rats and later White-tailed deer were early invaders of both Ulva and Stewart Island and over the years had a significant effect on forest ecosystems.

Both species were eradicated from Ulva , and post eradication 4 seriously at risk bird species were successfully re-introduced.

Today Ulva Island is a foundation member of a group of animal free sanctuaries and is perhaps the closest to pristine of any area of new Zealand open to the public.

We have some 18 species of native land birds to be seen on Ulva, and as they all evolved without disturbance by mammalian predators, can be watched going about their daily lives with little sense of our presence. For Birders from more “challenging” environments this can be a quite mind blowing experience.

My Association with Ulva Island

I started work on Ulva Island in 1969, as Forest Ranger, and our tours to Ulva draw on this initial experience, fleshed out with the many science and research expeditions I have field managed, and with my own day to day observations.
And while much of the tour is just the joy of observing the birds, trees, orchids and ferns we see, I do try to explain how the forest (works) and how the management has achieved the delight that we now enjoy.

I knew there would be profound changes in the ecology, but never did I think as quickly as has happened. And in fact I’m having to rethink my views of what our forests once looked like.
Some time ago I was asked to write a 2000 word Article for Indigena Magazine. It’s hard to compress Ulva Island into 2000 words, but hopefully it will help understand just what Ulva is all about …….Read Article Here
A friend sent me a link to a short video that was a revelation to me, and although it starts with a re-introduction, rather than a removal as Ulva was, it did help clarify my thinking as to what was happening… and it’s a lovely video ……..

We do hope that you take the time to visit Ulva Island while on Stewart Island. It really is an experience not to be missed. You can self guide… Water Taxis depart more or less on demand from Golden Bay, and DoC produce an excellent guide book.
But your most rewarding experience will be with a guide, and we would be honored to show you our very favorite place.

(in no particular order)
Click on the BLUE underlined birds names for details on each bird.

Both Cuckoos do frequent Ulva, and I have heard  but never seen them

Sadly we don’t have recorded song for all species…..a work in progress …. 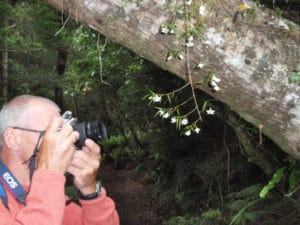 New Zealand has a surprisingly large number of native orchids. Surprising because on a cursory walk through our forests, alpine areas, bogs and open spaces we often fail to spot them, perhaps pre-conditioned to the large and flamboyant blooms we see in the florists. Closer examination shows us small and delicate blooms in all sorts of places.

One of the real delights of Ulva Island are the orchids we find growing, often in astonishing profusion throughout the forest. Many of them were quite hard to find in years past, and we can only think that those that have recently appeared are yet more beneficiaries of the rat free state of Ulva.

To illustrate the improvement in numbers, about 8 years ago I stepped backward off a track and stepped on a Spider Orchid. Probably the only specimen for several hundred yards and I got seriously yelled at by a botanist in the party. Today you cannot walk through the forest without standing on, in some places, carpets of them. And yet in mainland Stewart Island forest many remain difficult to find. 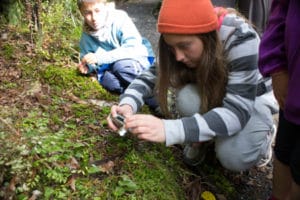 Both the book and the web site are excellent both for general interest and as a reference resource and although I had thought to have my own photos of Stewart Island orchids on this page decided that I would only be trying to re-invent the wheel. So with the kind permission of the Orchid Group and with special mention of Ian St George and Michael Pratt the society webmaster I have linked to the appropriate pages of the species which may be found on Stewart Island.

Those I have identified and observed flowering on Ulva are marked with their flowering months.