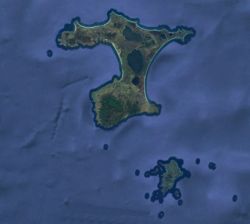 So this and the next 6 posts will be a daily resume of what we saw and did each day.

Planning and our travel from Stewart Island to the Chathams

We had initially wanted to go out 2 years ago, but personal circumstances intervened and so this was the year. Initially we wanted to fly to Invercargill with Stewart Island Flights , and then Air New Zealand to Christchurch where we would then transfer to Air Chathams for the appox 2 hour flight, and then another short flight by Cessna to Pitt Island. But we realised that there was virtually no wriggle room between landing at Invercargill and Air New Zealand check in, so decided that we had to take the ferry across, and then the bus up to Invercargill. This which would, we thought, get us to the airport with lots of time. BUT unknown to us Real Journeys (bless them) had changed the bus timetable and we would not have arrived at Invercargill until 1015, just 5 minutes before boarding, and so our holiday would have finished before it started. But the fortunes smiled upon us and with the kind assistance of Pedro & Fluff … two Stewart Islanders who happened to be driving up, we were able to make it easily, and so on to Christchurch with Air NZ. But there we found that due to mechanical issues our flight to the Chatham’s would not depart until late afternoon, some 4 hours late, and so we would not be able to fly onwards to Pitt Island and Flower Pot Lodge , which was the original plan. But the Pitt Island plane was un-serviceable any way.

We arrived at the Island well after dark (Chatham Island time is 45 minutes before NZ) and thence to the Hotel Chathams. Realising that we would not arrive for our 3 nights on Pitt, our hosts Bernie and Brent had organised alternative accommodation for us at the Hotel, where we had initially planned on staying for our final 4 nights. This service was just typical of what we found. Our hosts, well aware that weather and events beyond anyone’s hand can disrupt the best laid plans of mice and man  “just made it happen”.

During the night after our arrival the wind got up, eventually to what felt like a good gale, with accompanying rain squalls. And that’s what we woke up to. Looking out past the wharf to the north a good sea was running.

Down to breakfast at the hotel and Fran in reception told us Pitt was “off” until the sea dropped enough to go over by fishing vessel. 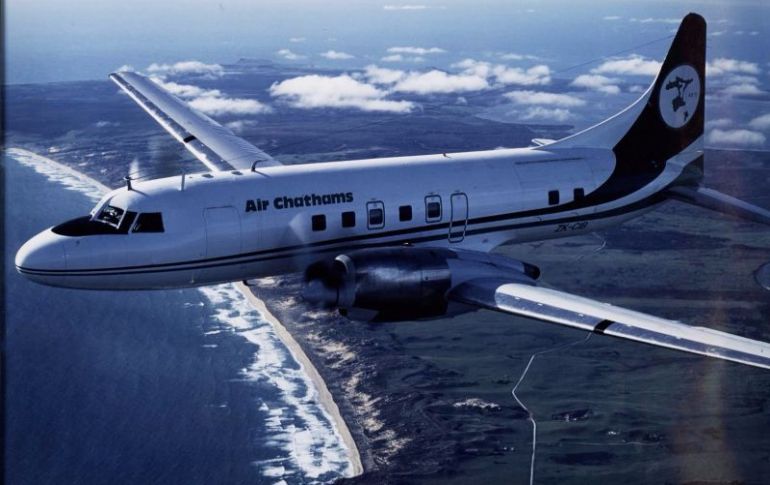 Seating about 20 (?) passengers and a considerable quantity of freight this service is critical for the residents who are great fans of online shopping for essentials ex the mainland.
It also ships out considerable quantities of fish, lobster and paua for the Islands fishing industry

Waitangi is the Island main settlement, and the hotel is right on the waterfront.
Meals are excellent and at very reasonable prices and the staff are great. Lots of laughs and very helpful about all things Chatham 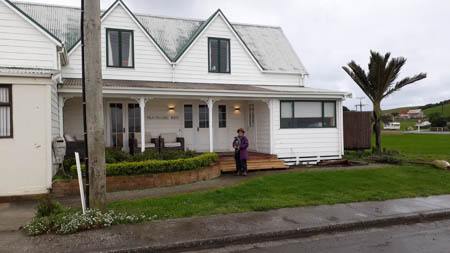 We were actually booked into the main part of the Hotel, but as we couldn’t get to Pitt Island as planned Brent from Flower Pot Lodge, and Francesca from Hotel Chathams just did what they do, and re-jigged our accommodation for us. Just part of the cooperation we found between businesses there. Travellers Rest was very “1950’s, but lovely and warm, comfortable and quiet. 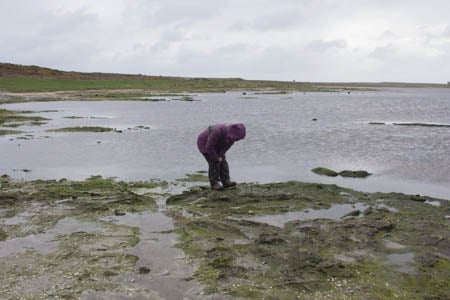 A very obvious feature of the Chatham Island are it’s many lakes and lagoons. The largest is Te Whanga Lagoon, and up in the north west corner is “Blind Jims”. And there you can find fossilised sharks teeth. So we stopped to see what we could find. Didn’t have a clue to what exactly we should be looking for, and as it happened not in the correct place. As you can see it was pretty cold, windy and with occasional rain 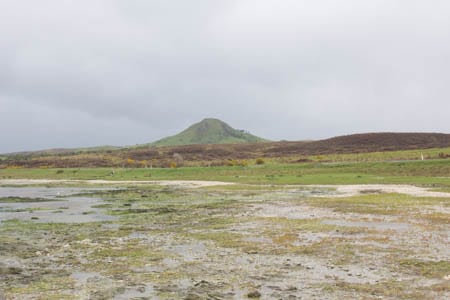 The Chathams are volcanic, and although the main Island is quite flat, the horizon is punctuated by these mini cones, which add a quite surreal aspect..
This is from the lagoon shore at Blind Jims and looks across scrubby heath lands 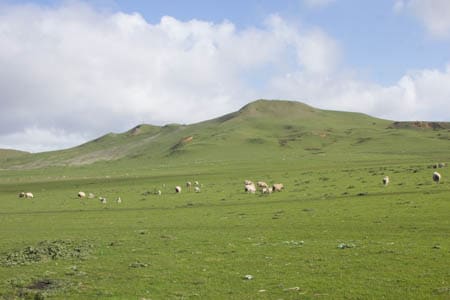 Much of Chatham Island is farmed, and we saw sheep and cattle everywhere. The pastures looked very lush, and apparently little fertiliser is used. But the stock seemed to be of high quality, in good condition and not at all “scrubby” as I might have expected 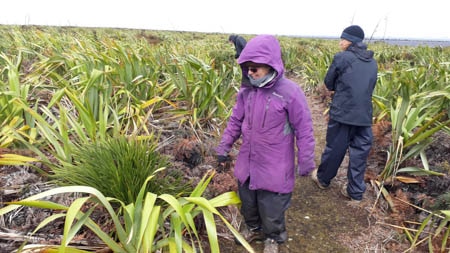 The Department of Conservation has many reserves on the Island, and we explored the Ocean Mail Wetland Walk.
Chatham Island Flax is only superficially like it’s New Zealand cousin. Even though we look like we’ve geared up for the South Pole it was not really all that unpleasant 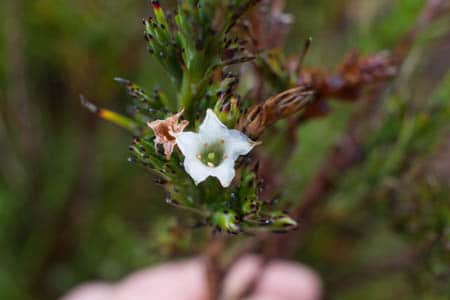 The Local Dracophyllium in flower 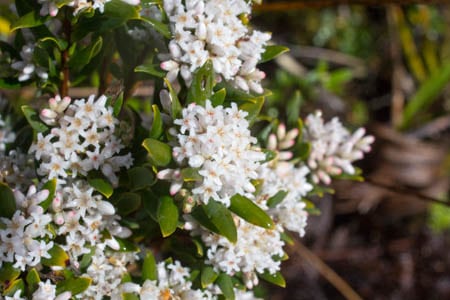 A local hebe. We saw many species which looked familiar, but are subtly different 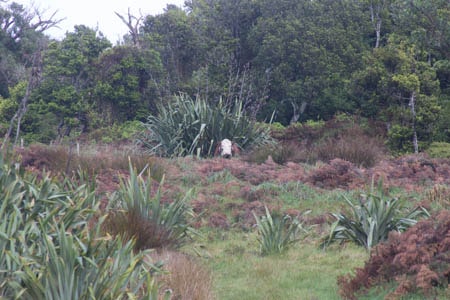 . I was more than just a little apprehensive when we spotted this fellow watching us … I have a healthy respect for wild cattle, but then we saw the fence. I suspect a basic requirement for all DoC staff is a high level of fencing skills. They must have many many 10’s of miles of fences keeping stock out of the reserves. The Chatham’s were once entirely forest covered, although not forest as a Stewart Islander would expect, but still a dense cover. But allow stock into it and the cover starts to break up, and the wind does the rest, with open pasture is the result. And it’s apparently a quite rapid process. It is heartening to see that many of the land owners are themselves actively retiring and fencing suitable areas and encouraging the forest to reclaim the land. 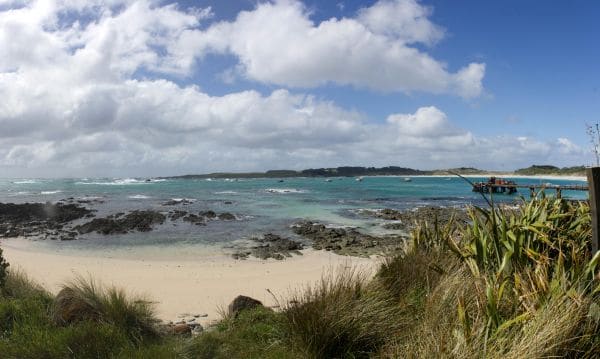 .This small harbour is somewhat sheltered by a series of off shore reefs, but is very exposed never the less, or at least to my eyes, conditioned as I am to well sheltered anchorages.
If I had a vessel anchored here I would develop industrial sized ulcers in a storm 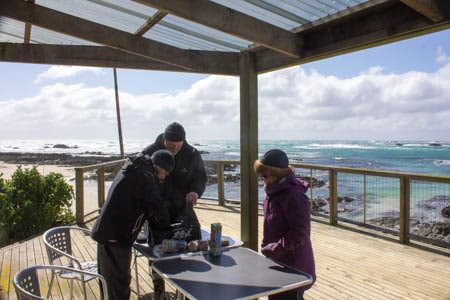 .We had lunch at Kaiangaroa … each day the hotel packed us a great lunch, sandwiches, fruit, cake and muesli bars, plus fruit juice and bottled water.
Now the sun is out, and although still very windy, it’s more than pleasant on the deck of the Kaiangaroa Social Club rooms 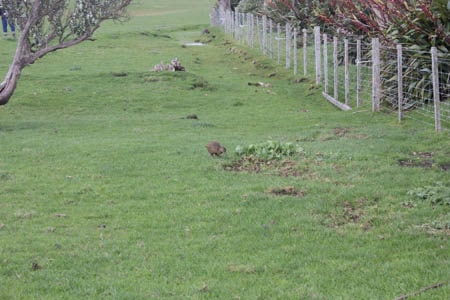 Buff Weka were introduced to the Chathams, and are legally hunted for the table

We saw weka everywhere, and their numbers must be considerable, and even though they are apparently a popular addition to the local diet we never sampled it. 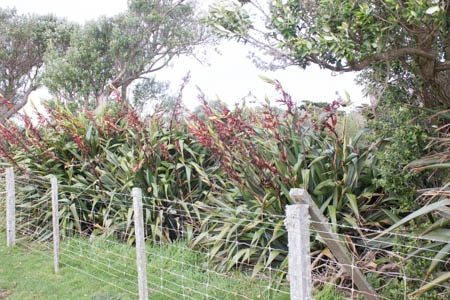 This farm has made extensive use of flax as shelter for stock, and we saw new plantings well fenced off from stock. 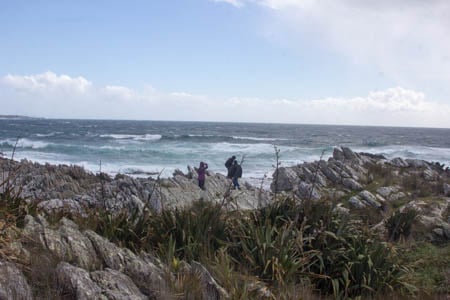 Wind and Sun, at Point Munning 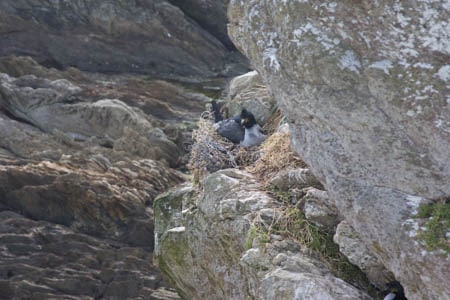 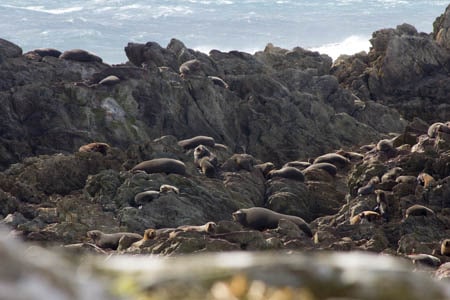 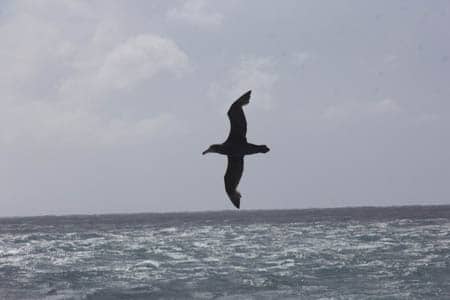 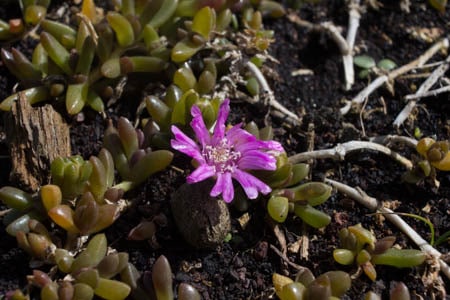 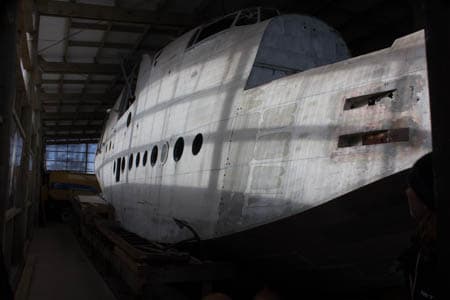 We visited the remains of a Sunderland Flying Boat which came to grief on takeoff from Te Whanga Lagoon, which served as a landing area for the first airservice from the mainland.

Site of an early shipwreck. The vessel Ocean Mail ran aground here, with a cargo of wool and tallow, thankfully without loss of life. She later broke up, and much of the cargo washed ashore where it was salvaged by a resident who had bought the wreck.

As we couldn’t get to Pitt Island… the plane was U/S ….  and the gales meant that a boat crossing was just not possible we decided to explore the Chatham’s. At breakfast we met Andrew and Pam, from the central North Island. They had arrived a day before us and like us were waiting to get to Flower Pot Lodge on Pitt Island. And as we couldn’t get a guide until the next day we decided to share the hire of a vehicle and  explore out towards Kaingaroa at the north east corner of the Island. Although there was a full gale blowing, with occasional showers, there was also lots of fine sunny spells, so the day was more than “do-able”

This slide series is just a fraction of what we saw. I knew the Island was not particularly hilly, but didn’t realise just how flat it was. The small volcanic cones scattered across the northern skyline and the many lakes and lagoons, especially Te Whanga Lagoon where the far shoreline is in places almost invisible it is so large made for a quite weird landscape. I knew there was extensive pastoral farming, but again was unprepared for the quality of the stock and the pasture. That wind was a part of the equation was quite obvious with the trees laying almost flat in places. But it didn’t appear to effect the stock, and we saw some of the best farmland and stock on our last day when we drove south along the coast from Waitangi. There the farms slope down to the sea, entirely exposed to the prevailing winds.