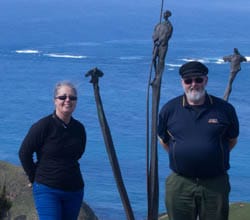 Planning and our travel from Stewart Island to the Chathams

We had initially wanted to go out 2 years ago, but personal circumstances intervened and so this was the year. Initially we wanted to fly to Invercargill with Stewart Island Flights , and then Air New Zealand to Christchurch where we would then transfer to Air Chathams for the appox 2 hour flight, and then another short flight by Cessna to Pitt Island. But we realised that there was virtually no wriggle room between landing at Invercargill and Air New Zealand check in, so decided that we had to take the ferry across, and then the bus up to Invercargill. This which would, we thought, get us to the airport with lots of time. BUT unknown to us Real Journeys (bless them) had changed the bus timetable and we would not have arrived at Invercargill until 1015, just 5 minutes before boarding, and so our holiday would have finished before it started. But the fortunes smiled upon us and with the kind assistance of Pedro & Fluff … two Stewart Islanders who happened to be driving up, we were able to make it easily, and so on to Christchurch with Air NZ. But there we found that due to mechanical issues our flight to the Chatham’s would not depart until late afternoon, some 4 hours late, and so we would not be able to fly onwards to Pitt Island and Flower Pot Lodge , which was the original plan. But the Pitt Island plane was un-serviceable any way.

We arrived at the Island well after dark (Chatham Island time is 45 minutes before NZ) and thence to the Hotel Chathams. Realising that we would not arrive for our 3 nights on Pitt, our hosts Bernie and Brent had organised alternative accommodation for us at the Hotel, where we had initially planned on staying for our final 4 nights. This service was just typical of what we found. Our hosts, well aware that weather and events beyond anyone’s hand can disrupt the best laid plans of mice and man  “just made it happen”. 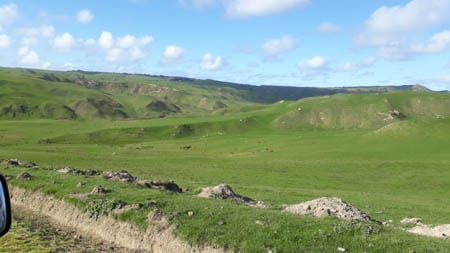 Driving south from Flower Pot Bay.
Much of Pit Island is farmed and has been completely cleared of the native forest cover. Initially this was done by hand by the first European settler and his family, Bernie our hostess is a descendant of that original settler and her family still farms around Hakepa. 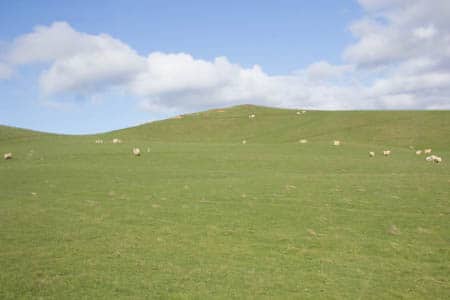 Driving south from Flower Pot Bay.
Once the forest was opened up wind  and grazing stock did the rest. Visually the clear pasture lands look as I would imagine Stewart Island would look if forest was replaced by grass. Brent told us these open fields have never seen a tractor 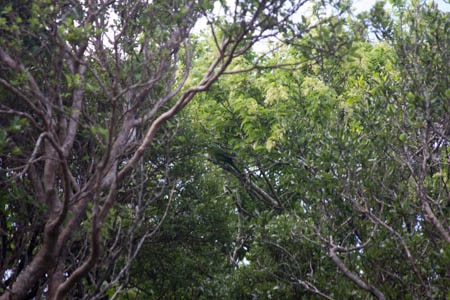 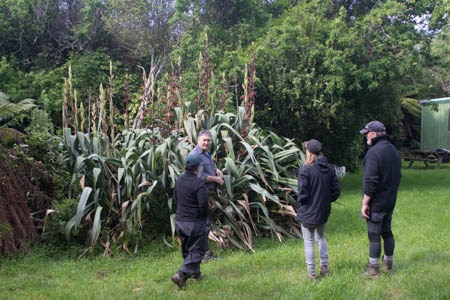 Ellen Elizabeth Preece Conservation Covenant
This reserve is Pitt Island as it was, and over all the Chathams we found several reserves such as this set up by local families covenanting parts of their land.
Were this not down stock and wind would complete the job of completely denuding the Islands. They appear to be managed as a joint venture with DoC 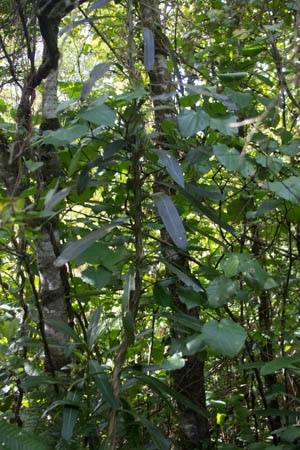 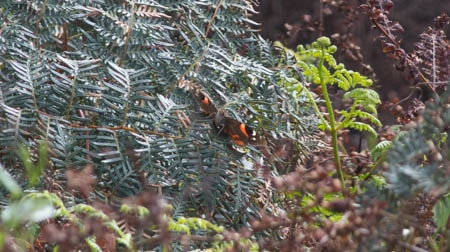 Ellen Elizabeth Preece Conservation Covenant
This was without doubt the warmest day we had had, and inside the reserve we found Admiral Butterflies enjoying the nettles 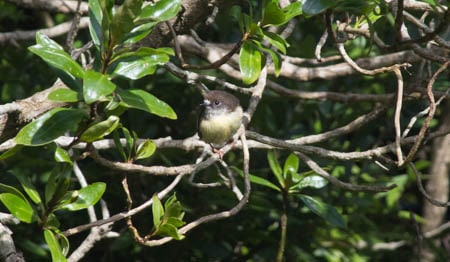 Ellen Elizabeth Preece Conservation Covenant
Chatham Islands Pied Tit, another of those similar but different, these Tits are now found only on Pit Island and a couple of other Island close by. Slightly larger than it’s South Island cousin 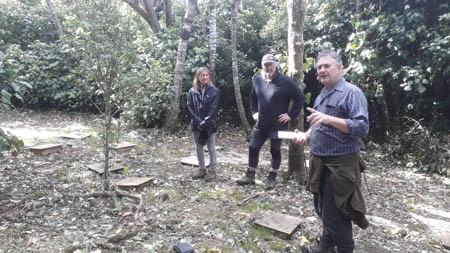 Ellen Elizabeth Preece Conservation Covenant
Brent explaining about these man made nesting burrows, a project by DoC to expand the breeding sites for endangered petrels 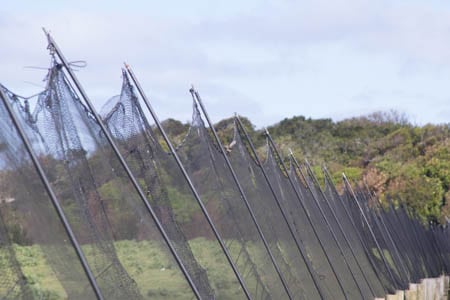 Ellen Elizabeth Preece Conservation Covenant
Reserve protection fences are critical to keep stock out. The high netting is to stop low flying petrels getting tangled on the wider fence netting when returning to their nests 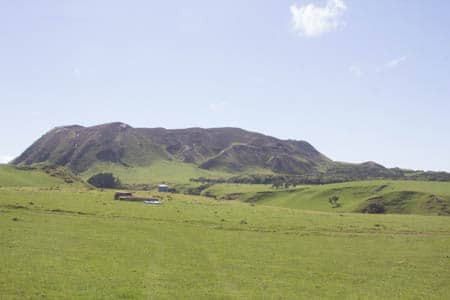 Mt Hakepa, Walk Em Up.
Looking north towards the southern slopes. The track we walked up may be seen going up from the eastern flank 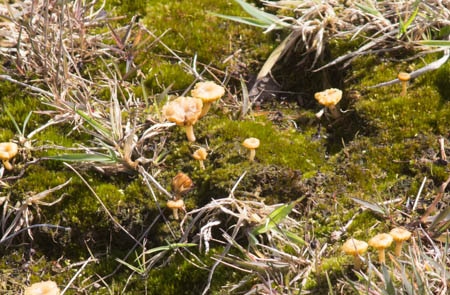 Mt Hakepa, Walk Em Up.
The upper slopes are pretty much fell fields, and we saw these fungi growing quite happily 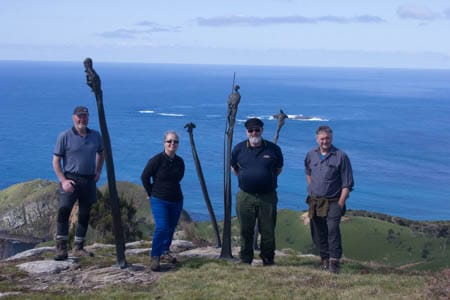 Mt Hakepa, Walk Em Up.
On Top !!   Facing out to the east are these 4 quite dramatic bronze statues. Erected by Polish Sculptor they represent Warrior, Generations, Astronomer and Fool

Mt Hakepa, Walk Em Up.
On Top !!   Facing out to the south South East Island and Glory Bay at the South East corner of Pit Island

Mt Hakepa, Walk Em Up.
On Top !!   Facing out to the north, with Chatham Island on the horizon. Beautiful sandy beaches are everywhere 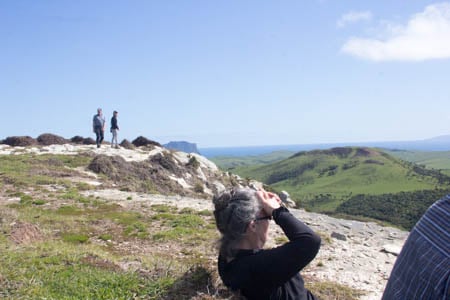 Mt Hakepa, Walk Em Up.
On Top !!   Facing out to the west, with Big Mangere 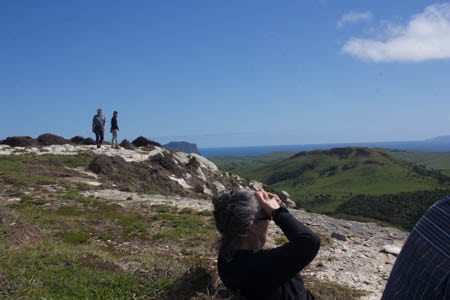 Mt Hakepa, Walk Em Up.
On Top !!   Summit fell fields. Lovely on a day like we enjoyed. I can only shudder to think what a real storm must be like here.

Mt Hakepa, Walk Em Up.
On Top !!   Summit fell fields. Lovely on a day like we enjoyed. I can only shudder to think what a real storm must be like here. 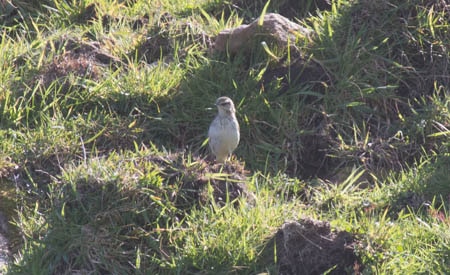 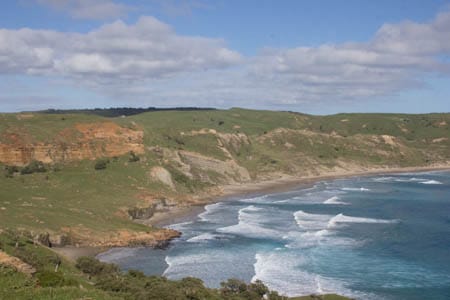 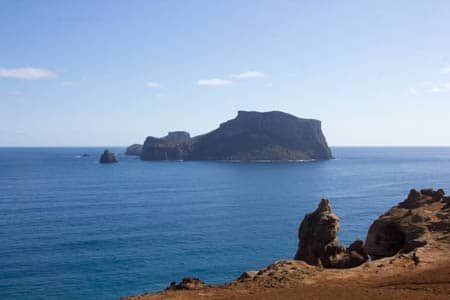 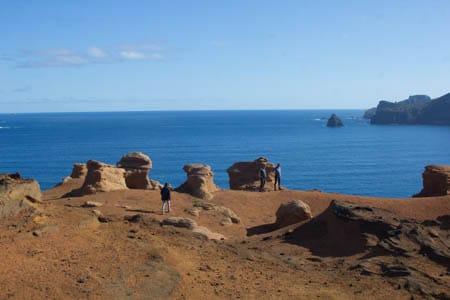 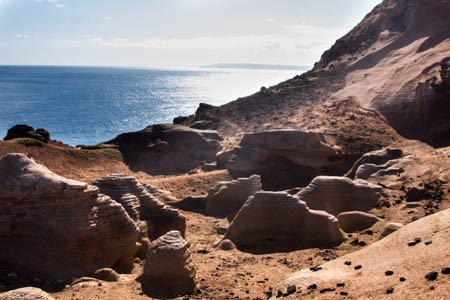 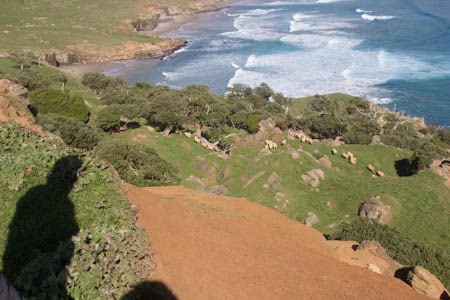 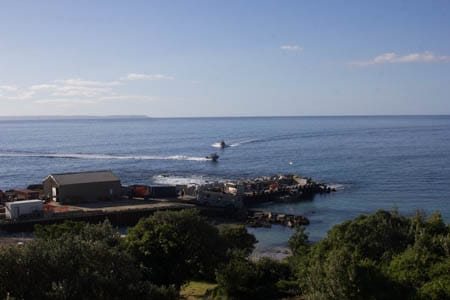 Today was “The Biggie” at least as far as I was concerned, although I didn’t discover this until later. After a great breakfast at Flower Pot Bay Lodge we set off in Brent and Bernies 4WD to our first stop, the Ellen Elizabeth Preece Conservation Covenant reserve which we walked through. The forest is pretty typical of the Chathams, What I would call lowish coastal species. Similar but subtly different to Stewart Island. Part of the reserve is set up with artificial nesting burrows for a rare species of petrel which normally nest on South East Island, but are being pushed out by there far more numerous cousins.  Then it was north to Mt Hakepa. Known locally as “Walk-Em-Up” as it was too steep to ride a horse up. This is the first inhabited land in the world to see the new dawn, even though Point Munning on the Chathams is slightly further to the East. This is due to it’s height of 231 metres. There is actually the remains of a 4WD drive track to the top. This was pushed in to ease the access for visitors to see the first sun of the millenium. The mountain is made of a volcanic rock called Trachyte.  My relative lack of fitness made it darned hard going especially as the other two guests in the party were central North Island farmers and thus well used to running around the hills. But I made it and the views were stunning. Then down off the hill and back in the vehicle and off to Waihere Bay, on the west side of Pitt, where we looked across to Big & Little Mangarere Islands of Black Robin fame. And then back to Flower Pot Lodge for a well deserved (for me at least) shower and feet up. An absolutely stunning day

We finished up the day with a wonderful dinner, which featured  of Pitt Island Mutton. Pitt Island sheep were originally  Saxony Merino, and like all merino, or at least all the merino meat I have sampled, wonderfully sweet and flavoursome. And generally not very fat, so a lovely lean meat.  But Pitt Island mutton is a merino out on it’s own, and if I had a couple of acres I would be looking to import a couple of rams and a few ewes. Part of the flavor is probably the environment they live in. A great meal.